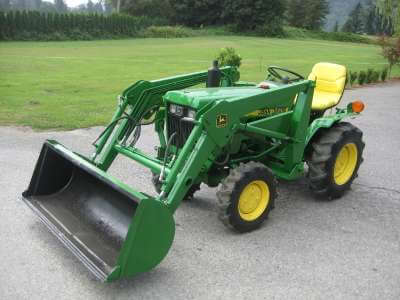 The John Deere 650 tractor is a fuel efficient, easy to maintain farm/agri tractor that has a treasure trove of features.

Built from 1981-1989, the 650 features a Yanmar 2 cylinder engine with 16 horsepower. The transmission has a flexible 8 front speeds and 2 reverse.

The 650 packs the power and reliability that is so iconic of the John Deere tractor line.

It is smaller than other farm tractors, but is extremely versatile and can handle a variety of attachments. For small to medium jobs, the 650 is the tractor of choice.

Rear attachments are connected with a three-point hitch (rear type I). Total weight without attachments is 1530 pounds.  These days you can generally pick one up for around $5000.

The John Deere 650 sports a 16 horsepower Yanmar engine with two cylinders. It has a displacement of 52.1ci and a rated RPM of 2600. This engine is known for being very versatile and easy to maintain.Fuel is supplied by a 6.2 gallon diesel tank.

The transmission provides a high and lower range in forward (8 speeds) and reverse (2 speeds).

The 650 has three PTO’s: front, middle and rear for ultimate attachment flexibility. Rear attachments are connected with a three-point hitch. Some attachments that can be used on the John Deere 650 include: Four-way blade, Rototiller, rake, and back blade.

Here’s what people are generally saying about the John Deere 650 tractor:

People enjoy excellent fuel efficiency with the 650, as well as exceptional power for its size. The 650 is very easy to operate and maintain. Users enjoy the 3-point hitch, 3 PTO’s, and draw bar. The high and low range in both forward and reverse are an added bonus. The size of the 650 allows it to operate in tight spaces.

The cockpit is on the smaller side, which makes it slightly uncomfortable for taller operators. The manual steering can make it difficult to operate under stop & go situations or tight spaces. Some people complain that the front loader can be difficult to attach. Also, a filled front loader can reduce traction on the 2WD models.

History of the John Deere Brand

With a legacy dating back as far as the 1830s, the John Deere brand is obviously reputable.  But why?  John Deere has consistently brought the kind of quality products to market that speak for themselves.  And how?

The leadership of John Deere has primarily been family.  Which gives the nod to the pass-down of family values like integrity and a commitment to innovation.

In nearly 200 years of history, John Deere has had eight great leaders that have shaped (or maintained) the brand quality we all expect.

What do YOU think of, when you think of John Deere?

Tell us in the comments!

Written By
Forrest Webber
More from Forrest Webber
Gardening to Practice Gratitude The centerpieces of a gratitude practice are thankfulness and presence. Gardening...
Read More