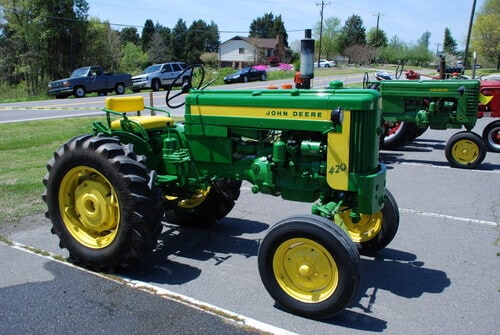 The John Deere 420 tractor is considered to be a jack of all trades in the industry.

It was produced in many different configurations to suit different jobs.

The 420 was produced from 1956 to 1958 and was equipped with one of three different engines. The 420 replaced the 40 with basically the same styling except for the change in color ( now green AND yellow).

However, some of the earlier models were painted all green so be sure to check the serial plate to be sure. A total of 55,000 of these models were built which sold for $2300 in 1958.

Although most John Deere 420’s have a straight steering shaft, some of the later models have a slanted one.

The engine is oriented in an “inline” fashion with vertical cylinders. Although a two-cylinder, it lacks a belt pulley and flywheel on the side due to this orientation. The Standard and Utility models were available with fixed width front ends.

The “rowcrop” model had a tricycle wheel configuration with either one or two wheels, or it could come with a wide adjustable width front end. There was also a high version known as the “highcrop”.

Perhaps the most unusual of the configurations was the model 420c, which has tracks instead of wheels.

The John Deere 420 carries one of three 2-cylinder engines. Three different engines were available, each with different fuel capabilities. One ran from gasoline exclusively, another from LP gas, and another from all-fuel. All were liquid cooled and were rated at 1850 RPM. Displacement was 113ci with a firing order of 1-2. The fuel tank on the gasoline and all-fuel tractors had a capacity of 10,5 gallons, while the LP version had a 20 gallon capacity, considerably more.

Rear Power Take-Off was included standard on all models except the 5-speed, clocking at 540 RPM. PTO was optional on the 5-speed.

There were four forward speeds and a single reverse.